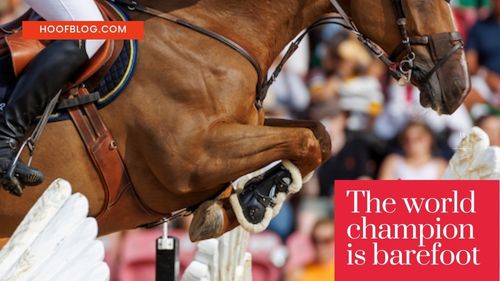 History was made at the FEI 2022 World Championships in Herning, Denmark in August. After the first two rounds of jumping, three of the top four horses on the scoreboard were shoeless. And at the end of the full event, the world champion individual horse was barefoot, as were half the winning gold medal team.
Some may think that barefoot grand prix jumpers leaping, landing, and turning on groomed-to-perfection arena footing aren't news anymore, after the brilliant Swedish gold team and silver individual medals at the Tokyo Olympics last year, but this was the FEI World Championship. 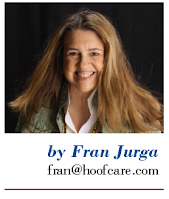 What we once called the World Equestrian Games, held every four years, was split this year into separate competitions, with show jumping, dressage, para dressage and vaulting world champions crowned in Denmark. Eventing and driving championships will be determined in September in Pratoni, Italy.
The new FEI World Champion show jumper is a barefoot Belgian warmblood named King Edward, ridden by Henrik von Eckermann of Sweden. The pair had five clears in Denmark; their ultimate score of 0.58 reflects a time deficit in the opening test on Thursday.

The 12-year-old King Edward was also part of the Swedish team that won the Olympic gold medal in Tokyo (2021) as well as FEI team gold in Denmark (2022). King Edward competed unshod in both Japan and in Denmark.

The champions had already been ranked #1 in the world by the FEI Longines Jumping Standings before Denmark began. Their win will keep them there for a while longer, as the next big international test at the grass at the Spruce Meadows Masters in Canada approaches next week. 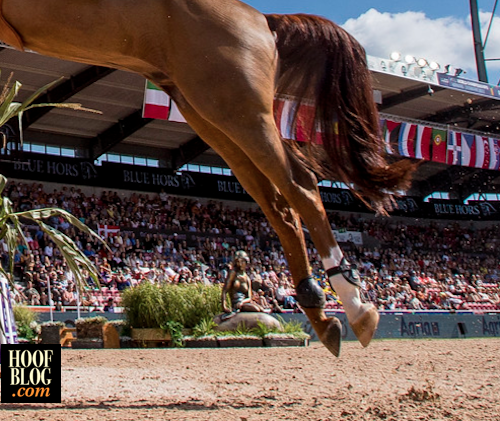 At the FEI World Championships in Herning, Denmark in August, Sweden's Henrik von Eckermann rode his barefoot Belgian Warmblood King Edward to win the individual world show jumping title, as well as leading the Swedish team to team gold. (His front feet are shown in the top photo.) The winning four-horse Swedish team had two barefoot horses. (detail from FEI press photo by Leanjo de Koster)
The rider was quoted in the Chronicle of the Horse as saying that he uses hoof boots to walk the horse back and forth from stable to field, but otherwise the horse seems more comfortable without shoes. “His feet [toe-in] a little bit, so I believe it (being barefoot) makes it easier for him to roll over (breakover) because otherwise the shoe is there,” the Swedish rider said. 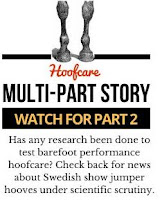 King Edward's farrier is the well-known Vincent Lamaille of Belgium.
Also unshod was von Eckermann's team mate, Peder Fredricson, and his barefoot Tokyo individual silver medal horse, All In. The pair's early rounds in the individual competition in Denmark had them in the top five placings.
Fredricson is currently ranked #3 in the world. He often "touches up" his horse's feet with a rasp; the horse receives regular professional hoof care from Norwegian farrier Aksel Vibe, AWCF. Fredricson formerly had the services of longtime Swedish international team farrier, Peter Glimberg, who shared his insight into top-level barefoot performance with The Hoof Blog after the Olympics last year.
After the second round of jumping in Denmark, three of the top five horses on the scoreboard were shoeless.
Three? The Swedes were not alone on the barefoot list; an impressive third horse was jumping barefoot in Denmark. A chestnut mare from France not only lit up the scoreboard in the early rounds; she and her rider, Julien Epaillard, did it in spectacular, risk-taking style. Just watch:
Caracole de la Roque, ridden by Julien Epaillard, excelled in the first two rounds for the individual title. Epaillard has been outspoken about his preference for competing his horses barefoot when conditions permit.
As seen on Peder Fredricson's Instagram account:

When interviewed, all three riders courteously defend and explain their preference for barefoot hoofcare as part of a more natural management program for their competition horses. Fredricson, more than the others, is forthright about his touching-up of All In's hooves as they grow. In recent months, his farrier has been Aksel Vibe, AWCF, of Norway.
All three top riders caution that their horses are in "intensive care" programs to preserve their soundness. Where the horses walk, over what surfaces is carefully considered at home and at competitions. When necessary, the horses are shod, such as for international events on grass like Spruce Meadows in Canada, Aachen in Germany, and a few others that are still able to host grand prix jumping on a traditional grass arena.
Epaillard credited his mentor, veteran French show jumper Michel Hecart, for being the pioneer of barefoot French show jumping, and for giving him the confidence to compete horses at the highest international level without shoes.
Epaillard is currently ninth in the world in the FEI Longines Jumping Standings. More than 3000 riders are ranked by the FEI each month.
In a 2019 interview with studforlife.com, Epaillard said,  "The transition for older horses which have already been shod for most of their lives is difficult. Horses are not at all used to working on their sole so the adaptation time can be really long.
"There are pros and cons, especially the constraints on grass tracks where we will probably have to re-shoe horses," Epaillard continued. "However, horses have no problem in being reshod after having been unshod. There is no strict rule anyway, you have to know how to adapt to different situations."

The barefoot news doesn't stop there. The week after Denmark, the Longines Global Champions Tour (LGCT) grand prix of London was won by the barefoot horse MOM’s Toupie De La Roque, ridden by Pieter Devos of Belgium.
The mare began with Michel Hecart and was competed by Julien Epaillard before she was purchased by the Mares of Macha (prefix MOM) ownership and breeding group, led by Devos.
According to an unconfirmed mention by Horse and Hound Magazine, London's second-placed rider Olivier Philippaerts was also riding a barefoot horse, the 10-year-old H&M Miro. H&M is a Swedish-owned international fashion chain which also owns Peder Fredricson's champion All In.
Read the full coverage of the FEI World Championship show jumping team finals on World of Showjumping.
Thank for you sharing this article with others. Please use the link provided to share on social media. Re-use of all or any part of this article on other websites, social media, or other means is illegal in any nation or in any language.

© Fran Jurga and Hoofcare Publishing; you are reading the online news for Hoofcare and Lameness Publishing. Please, no re-use of text or images without permission--please share links or use social media sharing instead. Do not copy and paste text or images--thank you! (Please ask if you would like to receive permission.)
In addition to reading directly online, you may also receive email "alerts" containing headlines and links(requires signup in box at top right of blog page).
The helpful "translator" tool in the right sidebar will convert this article (approximately) to the language of your choice.
To share this article on Facebook and other social media, click on the small symbols below the labels. Be sure to "like" the Hoofcare and Lameness Facebook page and click on "get notifications" under the page's "like" button to keep up with the hoof news on Facebook. Or, paste this article's address from the browser bar into your post.
Click here to sign up for easy email alerts for new articles on the Hoof Blog.

Read this blog's headlines on the Hoofcare + Lameness Facebook Page
Enjoy images from via our Instagram account.
Disclosure of Material Connection: Hoofcare Publishing has not received any direct compensation for writing this post. Hoofcare Publishing has no material connection to third party brands, products, or services mentioned. I am disclosing this in accordance with the Federal Trade Commission’s 16 CFR, Part 255: Guides Concerning the Use of Endorsements and Testimonials in Advertising.
Hoofcare + Lameness is reader-supported. If you purchase items through links on this site, the company may possibly earn a small affiliate commission, at no cost to you.
Fran Jurga
Share
‹
›
Home
View web version