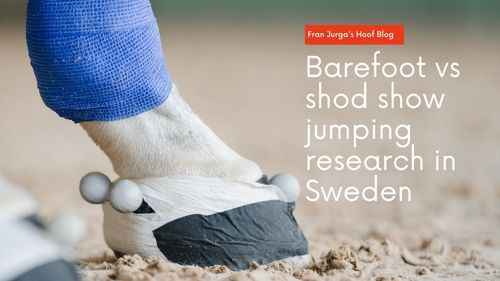 The world watched Swedish barefoot show jumpers sweep the individual and team gold medals at the FEI World Championships in August in Herning, Denmark. At the same event, the media received a preview of a comprehensive hoof science study that hopes to explain why they won.
The Hoof Blog offers this exclusive report.

For almost a year, a research group led by Professor Lars Roepstorff of the Swedish University of Agricultural Sciences, Swedish veterinarian Staffan Lidbeck, and Norwegian farrier Aksel Vibe worked with Olympic team gold and individual silver medalist Peder Fredricson of Sweden to analyze his horses.
With the funding of the Swedish-based insurance group Agria, the researchers studied the same horses, over the same fences, on the same indoor arena surface, but with shoes on and shoes off. 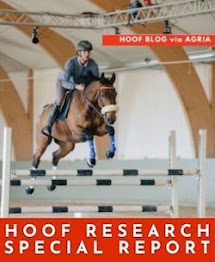 At the press conference at Herning, Hoofcare Publishing had the insight of Drs. Tracy Turner and Julie Wilson, well-known veterinarians from Minnesota who were at Herning, where Dr Turner was serving as an FEI vet.
NOTE: This research project is still in progress; the plan is for the final scientific report to be completed in the coming months. The research mentioned in this report is early data. More data will be collected and submitted for peer review, publication and dissemination.

Following Sweden’s dominance at the Tokyo Olympics, where Swedish riders Peder Fredricson and Henrik von Eckermann excelled on horses without shoes in an indoor arena, the world was curious about their hoofcare programs. After returning home last September, Fredricson and his veterinarian, Staffan Lidbeck, approached Agria, the Sweden-based European horse insurer, about funding for a research study.
Watch this and more videos on the Hoofcare & Lameness YouTube channel--be sure to subscribe to see new videos.
The group recruited Professor Lars Roepstorff of the Swedish University of Agricultural Sciences, who is well known for his research on arena surfaces for the FEI.

The first stage of the study involved public feedback on key questions that the research would need to answer. The project interviewed veterinarians, farriers and riders, asking for opinions on barefoot hoofcare as an alternative to shoes.
The interview's poll showed an equal preference for barefoot hoofcare and traditional shoeing.

Experiments were run at Peder Fredricson’s training farm in Sweden. (See video in this article.) Horses were fitted with markers on their bodies and limbs for precise measurement with and without shoes via multiple video cameras all recording at once.
On the foot, the researchers placed markers on both heel bulbs and one on the center of the toe.
Norwegian farrier Aksel Vibe, AWCF, joined the team as the farrier who would shoe and unshoe the horses; he created a protocol for trimming and shoeing each horse. Aksel is also now one of Peder Fredricson's farriers and is also employed by Mustad Hoofcare.
The initial study ran for three days, with the team capturing data from eight horses ridden by the same rider, Peder Fredricson. The horses jumped with and without shoes, in random order. Measurements were recorded as each horse cantered to a low vertical and then a moderate oxer on a surface described as typical for an indoor jumper facility.
Data was collected from over 400 test runs, recording at a rate of 400 data points per second. The markers on the heels and toe were round balls that reflect light.

Stage 3: General kinematics with and without shoes

The next step will be to analyze how the horses' movements are affected with and without shoes - for example, in terms of stride length, stride height and angles. Roepstorff said he hopes to collect data on deep digital flexor tendon load with and without shoes, and to test whether the coffin (DIP) joint is affected by shoeing.

The study data clearly showed that the heels expand on landing and contract as the hoof leaves the ground. As expected, both expansion and contraction were consistently greater when the horses were barefoot.
The early data also documented increased vertical movement of the heels when a horse is barefoot.
Swedish competitors have shared anecdotally that they detect differences in performance, with a horse being quicker in lifting the front limbs jumping when barefoot and will also have a quicker canter.
“It's about millimeters in difference with and without shoes, and that might not sound like much,” Roepstorff said in a press release. “But I can draw a parallel: When it comes to ground, we can see that just a few millimeters of additional failure/concussion results in ​​clearly reduced maximum forces and thus less load on the horse's legs."
A stick figure computer rendering helped illustrate the data. For instance, the markers on the heels could be enlarged to highlight the expansion. The arc of the jump was also different between shod and unshod horses over the same fences. Later, joint kinematics will be analyzed.
This video is an interview with Aksel Vibe, AWCF, who worked with Grevlunda farrier Martin Westford to shoe and unshoe the show jumpers for the study. It is in Swedish but readers may like to see more of the horses' feet and, if you can understand the audio, learn about the shoeing and trimming protocols used in the study.
Roepstorff used a cadaver foot to demonstrate hoof mechanics and effects of weightbearing, followed by a fluoroscopy video.
Although the early observations and data suggest that barefoot hoofcare has many benefits, both Roepstorff and Lidbeck were cautious in other interviews and in the question-and-answer period with media after the press conference.
In the Swedish horse news magazine Hippson, Roepstorff is quoted as saying that the goal will ultimately be to explore new materials and techniques that can handle the shoe's most important functions (wear protection, anti-slip protection, etc.), but at the same time allow normal function for the foot. "I think that is the future," he said.
So do we.
Watch for Peder Fredricson and his Swedish teammate, FEI Individual World Champion Henrik von Eckermann, to compete in the famous Spruce Meadows Masters over the weekend of September 11, 2022. It is a leg of the Rolex Grand Slam of international show jumping. Both riders are expected to have their horses shod for the famous Spruce Meadows grass field.
Hoofcare Publishing would like to thank Agria Animal Insurers for their assistance with this article and video, and for funding the study. We look forward to the publication of the results. Special thanks to all the researchers and Peder Fredricson and Aksel Vibe; great appreciation to Drs. Turner and Wilson for attending the press conference and sharing valuable impressions. Special thanks to Roland Thunholm for photo permission on Agria photos.
If you interested in hoof research, consider a subscription to HoofSearch, a monthly live-linked report listing all new hoof and equine lameness research and abstracts.
To stay current on hoof news, please sign up for the free Hoof Blog e-newsletter to receive alerts when new articles like this one are published. Just click here. We'll do the rest.

© Fran Jurga and Hoofcare Publishing; you are reading the online news for Hoofcare and Lameness Publishing. Please, no re-use of text or images without permission--please share links or use social media sharing instead. Do not copy and paste text or images--thank you! (Please ask if you would like to receive permission.)
In addition to reading directly online, you may also receive email "alerts" containing headlines and links(requires signup in box at top right of blog page).
The helpful "translator" tool in the right sidebar will convert this article (approximately) to the language of your choice.
To share this article on Facebook and other social media, click on the small symbols below the labels. Be sure to "like" the Hoofcare and Lameness Facebook page and click on "get notifications" under the page's "like" button to keep up with the hoof news on Facebook. Or, paste this article's address from the browser bar into your post.
Questions or problems with this site? Click here to send an email hoofblog@gmail.com.
Click here to sign up for easy email alerts for new articles on the Hoof Blog.

Follow Hoofcare + Lameness on Twitter: @HoofBlog
Read this blog's headlines on the Hoofcare + Lameness Facebook Page
You might enjoy the images on our Instagram account.
Disclosure of Material Connection: Hoofcare Publishing has not received any direct compensation for writing this post. Hoofcare Publishing has no material connection to third party brands, products, or services mentioned. I am disclosing this in accordance with the Federal Trade Commission’s 16 CFR, Part 255: Guides Concerning the Use of Endorsements and Testimonials in Advertising.
Fran Jurga
Share
›
Home
View web version